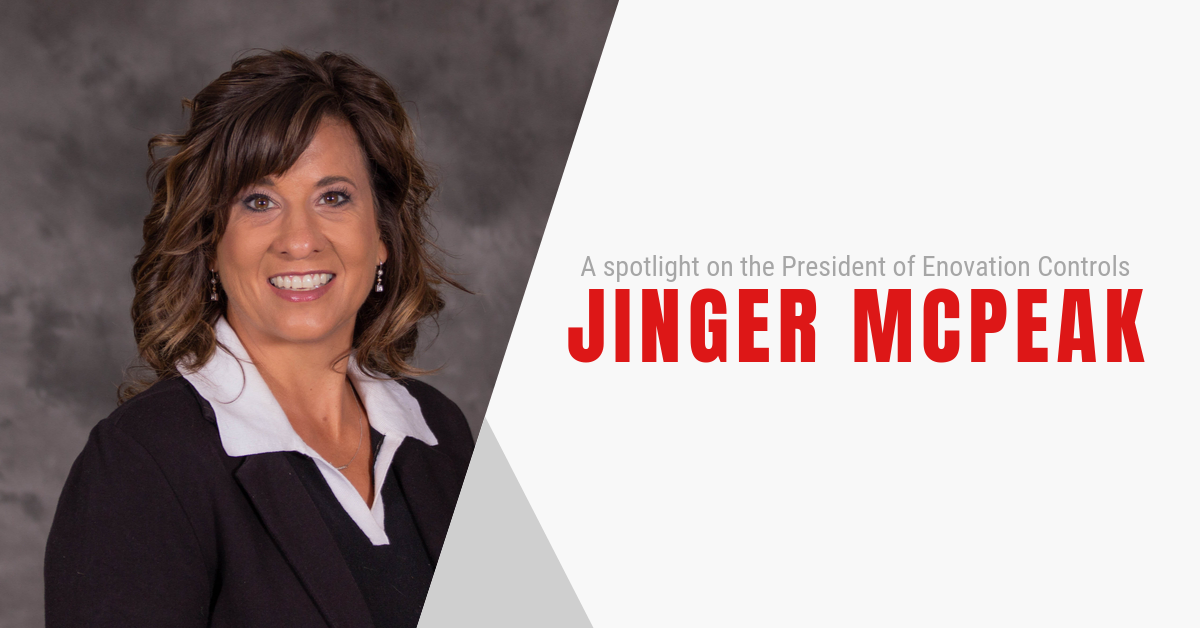 In honor of National Boss’s Day, we’re taking a moment to show some appreciation for our boss and president, Jinger McPeak. She brings a strong sense of leadership and a fierce dedication to our core values every day, and last month she completed her 15th year with the company.

Before her time at Enovation Controls, McPeak received both her Bachelor of Science in statistics and Master of Business Administration from Oklahoma State University. She then began her professional journey at Mercury Marine in Stillwater, Oklahoma, working first as a Quality Engineer and working her way up to a National OEM Sales Manager position. This experience in the manufacturing industry eventually led her to Enovation Controls, where she started as a Market Manager for Marine Applications before being promoted to several other positions, the most recent being president.

McPeak says her strong sense of pride in the company, the products and the employees are what drives her daily work. She believes the company exudes a work ethic and deep application knowledge in the industries in which we participate, which are only a few of the reasons she is proud of the employees at Enovation Controls.

“I think we have the best, hardest working people anywhere,” said McPeak. “When we go places or when people meet us, they are always so impressed and say things like, ‘There’s so much energy and people are happy to be here, and you can feel it when you walk in the building.’ I love that.”

Under McPeak’s leadership, Enovation Controls has experienced strong growth and was recently recognized as a Great Place to Work®-Certified company. Throughout her career, McPeak learned that the best way to move forward was by not going it alone.

“You need to surround yourself with the right people,” she said. “The culture, the core values, the people, it’s all very important. Building a team and being on a team that believes in the same goal and is sold out to the process makes everything easier – we refer to it as the ‘secret sauce.’”

At Enovation Controls, our goal is to live by our core values daily. Since she started at the company, McPeak has been the catalyst behind defining a strong list of core values that people remember and follow. Today, you’ll see posters listing the core values hanging around the office and manufacturing building thanks to a vision set forth by the previous owners of the company and advanced by McPeak.

“I don’t know how I would have done the job without these core values,” said McPeak. “I don’t know how I would have survived and been able to lead in a way that was progressing the company without this lifeboat. There are tons of articles about culture and core values now, and we were deeply committed to this process before it was in vogue. I like to say we were ‘country when country wasn’t cool.’”

Enovation Controls’ core values aren’t simple, made-up mantras to satisfy leadership—McPeak and her team designed these values because they strive to live by them every day.

“She is the same in the office as she is at home,” said Executive Assistant Jill Grider. “She is very transparent, and those core values are her 100 percent.”

McPeak believes that behind a successful company is a foundation built on values. When every employee has the same goal in mind and lives by the same values, not only does the company become stronger, but the people as well.

“I hope that’s my legacy,” said McPeak. “We built a culture that built people. And when they go on to other places in their life or other roles, towns or businesses, I hope they take a piece of that with them and they change those places too.”

McPeak is a major champion of our core values and strives to live by them every day. Want to know which Enovation Controls core value you embody in your life? Take our core values quiz to find out!