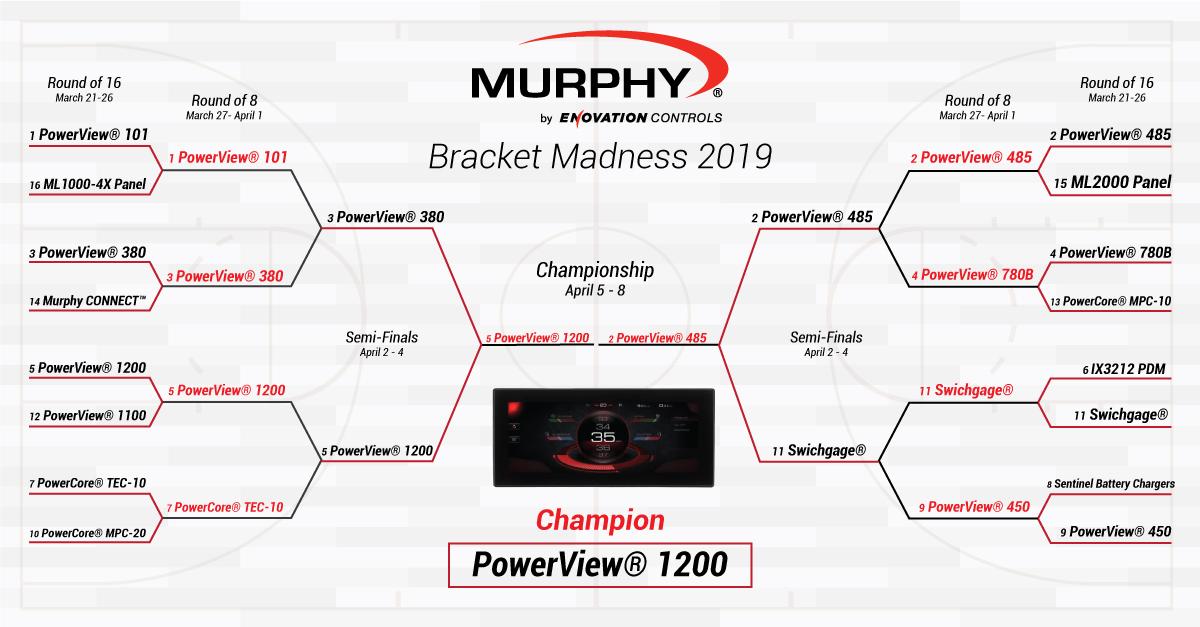 It’s March, and that can only mean one thing: it’s bracket making season!

We assembled a bracket with some of the most popular Murphy by Enovation Controls products and seeded them at random. For the last few weeks we ran polls asking you to pick your favorite Murphy products and now the Champion has been determined!

The PowerView 1200 is our champion!

In a runaway victory, the PV1200 has claimed the top spot in our bracket and among our customers. The PV1200’s ultra-wide 12.3-inch display has been a hit since it’s introduction and its expansive storage and high-speed processor give it the ultimate ability to showcase high-quality graphics and animations. It takes resiliency to win a tournament, and the PV1200 was made for harsh outdoor environments. Its bonded LCD can easily be viewed, even in full sunlight, and its available glove-friendly touchscreen and rugged design make it a perfect solution for all types of environments and applications. Contact your Murphy by Enovation Controls sales representative to get started on your next PV1200 project.

We picked three lucky winners from the pool of correct guesses! We’ll be contacting you via email to send you your prizes.

It all comes down to this. After a few rounds of close calls, the Swichgage loses by a single vote and the PV380 is defeated in a unanimous decision.

We’re now down to our final four! The PowerView family is well represented with the PV380, PV485 and PV1200 but the classic Murphy Swichgage made its way into the semifinals by a single point!

The first round was brutal for PowerCore controllers and panels, and even the bracket-favorite PDM went down in a close matchup against the legendary Swichgage. But now that our thrilling opening round come has come to a close we now have some exciting new matchups for our Round of 8.