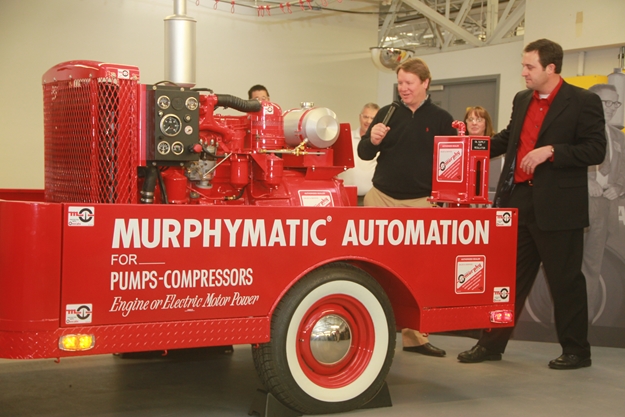 There was a time when seeing Pat Murphy’s red trailer pulled past the office was a normal sight, but it hasn’t been that way for years. Instead, the trailer has been sitting behind the office slowly losing its trademark red color and collecting rust.

Application Sales Coordinator Chris Weiche brought the trailer’s poor condition and its important place in the company’s history to the attention of Pat Cavanagh, Enovation Controls’ CEO. “It was more or less just kind of heartbreaking, knowing the history of it,” Weiche told the Tulsa World when they came out for the trailer reveal.

Led by Jake Holloway, a project was launched to repair Pat Murphy’s old show trailer, but the entire project was performed in secret. Employees were invited to the manufacturing building Feb. 23 for a special core values celebration. In the center of the area was a small section covered by white and red curtains.

“Frank has no idea this is happening. This is a complete surprise to him,” said Justin Bray, Vice President of Organizational Effectiveness, addressing the crowd of employees and vendors who gathered for the unveiling. “Today we’re going to show you a piece of iconic history, but today it’s a symbol of our core values, and that’s why we made the effort to do so.” 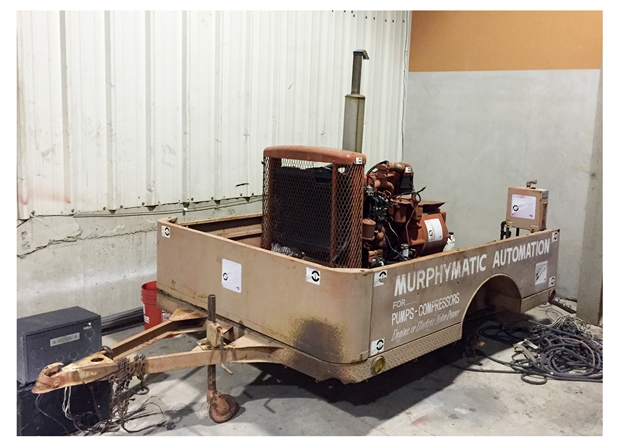 Bray then handed off the microphone to Holloway who mentioned how the company is lucky to have something like this to treasure and how they preserved some of its scars because “it earned it.”

“I could go on and on about what we’re about to see, but I’d rather just show you,” said Holloway. Holloway and others quickly removed the curtains, revealing the trailer.

“Wow. This is incredible,” said Frank Murphy III, reacting to the unveiling of the trailer. Murphy is the executive chairman for Enovation Controls. “I know Pat and Mike would be brought to tears if they were sitting here looking at this fine, restored piece of equipment.”

Cavanagh closed out the event with some thoughts on how the company has grown since the trailer first joined the company. “This trailer actually went on the books of the company in 1958, and it’s been around a long time,” said Cavanagh. “But this simple idea has morphed into where we are today. From simple, reliable engine protection to the most sophisticated engine controls and software on the planet today. So I’m really proud to be associated with this company and what it’s been able to achieve thanks to Pat Murphy and his hard work, determination and innovation.”