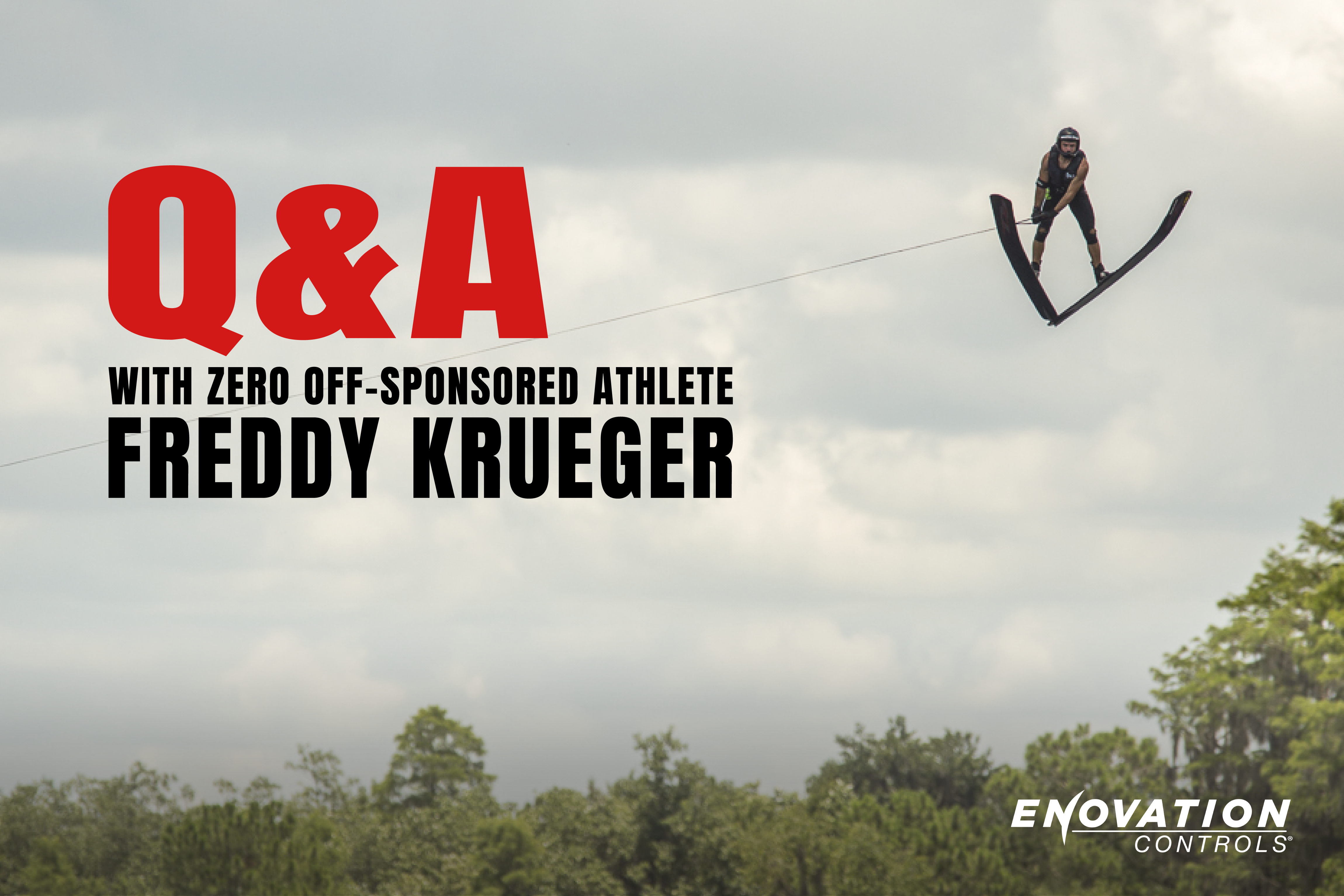 When you hear the name Freddy Krueger, you may remember the terrifying serial killer from the “A Nightmare on Elm Street” movie series. But there’s another Freddy Krueger—and the only thing he’s slashed is the World Record for water ski jumping. 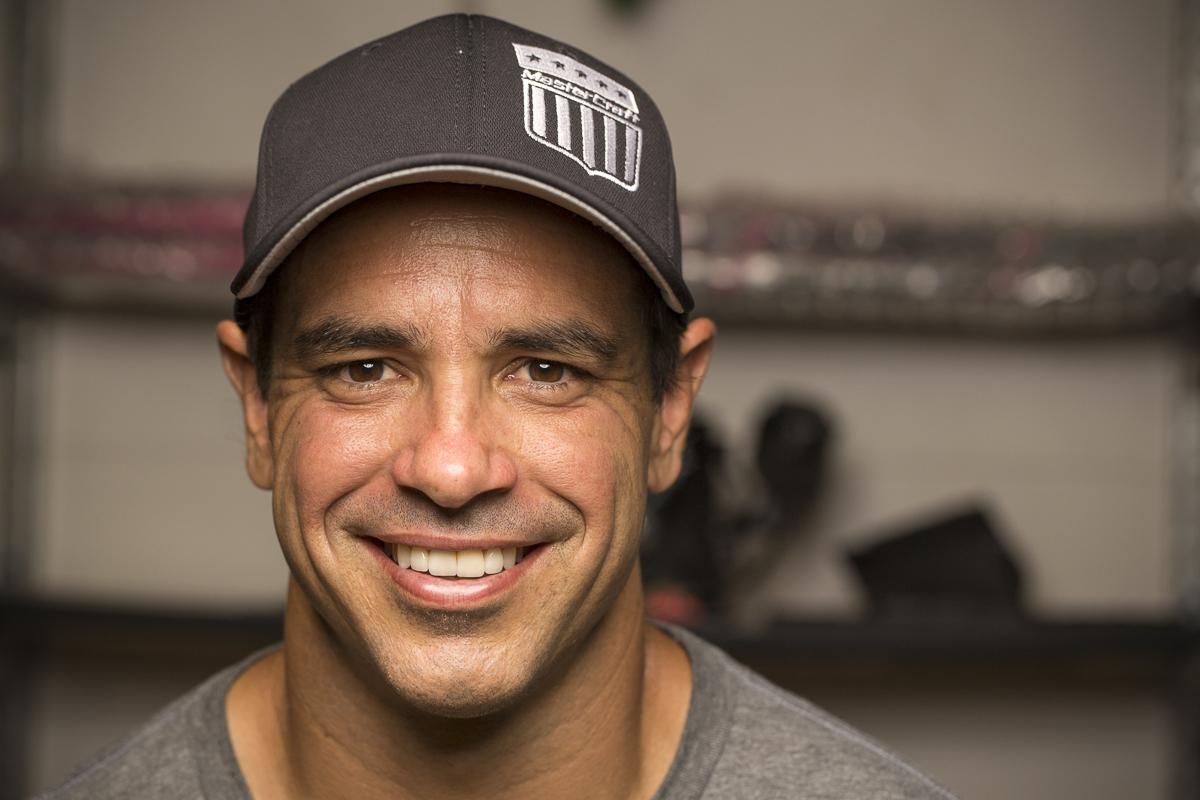 Zero Off-sponsored athlete Freddy Krueger has been a professional water ski jumper for over 20 years, and he has the records to prove it. With over 250 professional events and nine World Records under his belt, Krueger has established himself as a top leader in the sport.

We spoke with Krueger to learn more about his career and how Zero Off cruise control systems have impacted his performance.

How did you become a competitive skier?

Freddy: I was, in some sense, born into it.  My parents were ski enthusiasts and were members of a club that had some competitive skiing, but primarily show skiing on a public lake in Decatur, IL.  Both my parents and my two older sisters enjoyed the competitive side of the sport, so it was a natural fit for me to follow them.

I was three when I first learned to ski, and by the time I was four my family, along with 19 other families, left the larger ski club in Decatur and started a strictly competitive club and named it P.I.T.S. (People Involved in Tournament Skiing).  This would have been right around 1980. My two older sisters are still skiing competitively, and my parents have backed off the tournament scene as competitors, but both were actually competing well into their 70’s with my Dad winning his first national title just a few years ago in the slalom event. So, my introduction was easy, and quite honestly, I’m not sure I’m even the most impressive skier in my family!

What is your proudest achievement as a skier?

Freddy: I’ve been extremely fortunate to have some pretty lofty achievements in my career.  I won the third pro event I ever skied in, I’ve ski flown a record 312 feet on live television and won a little over 130 professional events.  Narrowing it down to a single moment is tough, and your first pro win is always right at the top of the list. But if I had to choose the one moment that will always get my blood racing, it would be my first World Record.

It was in a US Open finals in Austin, TX, and I had squeaked into the finals in the last position. I was first off the dock, and my first two jumps were nothing special, so all the pressure was on that last jump. I’ve always had a philosophy that when you have two strikes, you swing for the fences, and on that day, in that moment, I hit one of the most technically perfect jumps of my career.  The hardest part was setting that record, then having to wait to see if one of my competitors was going to break it right back! But I got the win and I got the record, and the satisfaction of breaking it in a finals with everyone there and all the pressure on as an athlete meant I was finally grasping the dream of being the legitimate elite level jumper that I had dreamed about since I was eight years old.

Of all the places you travel to ski at, where is your favorite and why?

Freddy: In the US, it’s hard to not enjoy the US Masters at Calloway Gardens because it’s a large, educated crowd in one of the most beautiful park settings in our country. Outside the US, I have always tended to enjoy Australia from a competition standpoint. The Moomba Masters in Melbourne has such a history. It’s downtown during the Moomba Festival with a huge carnival atmosphere and fireworks and a couple hundred thousand people milling around and sitting on the banks of the Yarra River—right across from the Rob Laver Tennis Arena—to enjoy the skiing.  It’s probably the closest atmosphere to what NBA and NFL players get exposed to, and as much as I hate that 30-hour trip to get there, I have enjoyed that tournament for nearly 20 years.

Summer has come to an end, but how long will you keep going out and skiing?

Freddy: This year is a little different because we normally have pro events into November, but we had a schedule change this year and we are finishing up the pro part in September. Unfortunately I suffered a rib injury in August which has been keeping me off the water, but I hope to be able to get back on my skis in late October and use the extra down time to work on new technique  and equipment ideas I’ve been wanting to try.  We’ll take a couple weeks off for the holidays and then come back charging after the first of the year to get ready for the first event down in Australia in early March.

How has Zero Off impacted your skiing performance?

Freddy: It’s unbelievable how Zero Off has moved the performance level forward in ways none of us could have imagined.  In the mid 1990’s, the first cruise control systems were introduced to our sport, and it was amazing how giving the athletes a more consistent pull helped create an environment where the athlete could start to look internally at what they needed to do better rather than look at external forces, like the boat drivers, to advance their skiing.  Around 2007, Zero Off was introduced to the sport, and that consistency of the boat pull and the absolute elimination of athletes getting different pulls took the sport to record breaking heights, and it did that incredibly fast.

With the older systems, especially with jumping, we saw discriminating factors working against larger jumpers, so Zero Off found ways to eliminate those factors and truly level the playing field.  The end result has been fair competition.

How does Zero Off compare to other cruise control systems?

Freddy: With all due respect to other systems out there, there is no other alternative.  There isn’t another cruise system that can handle the high-performance aspects of skiing, riding or surfing competitively.  And honestly, even if you’re not a competitive skier or rider, your time on the water with your family should never be interrupted by frustration when the pull from the boat isn’t exactly what you want.  The dedication and efforts that the Zero Off team puts into perfecting not only the pull, but also the reliability so that your time on the water is enjoyable, predictable and stress free, is the definition of true dedication.  To be even a small part of that team and process is humbling and inspirational, and I try to emulate their dedication in all aspects of our industry.